10 ways Aboriginal Australians made English their own 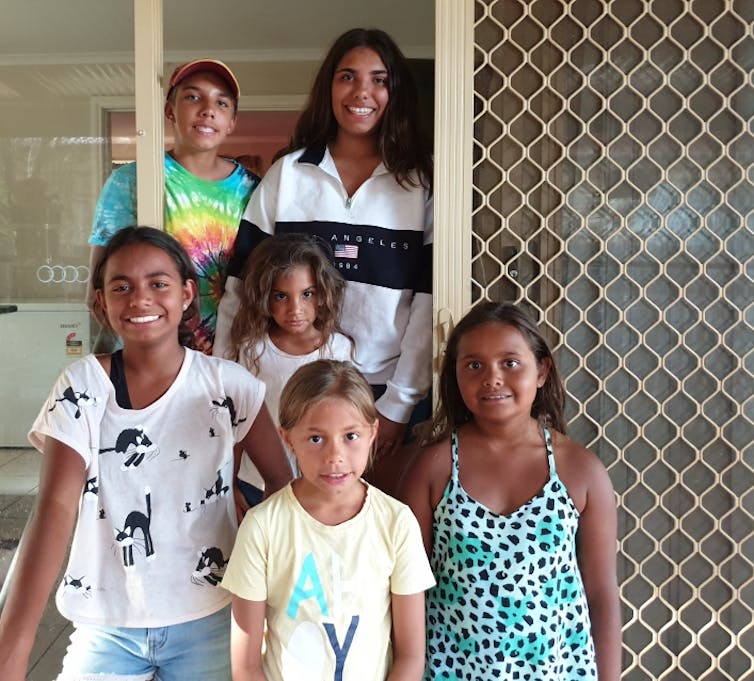 Aboriginal English is spoken by an estimated 80% of Aboriginal and Torres Strait Islander people, and is the first and only language spoken by many Aboriginal children.

There are similarities between Standard Australian English and Aboriginal English, but this can pose serious obstacles for its speakers, who are misinterpreted by some as speaking poor English.

In fact, Aboriginal English has its own structure, rules and the same potential as any other linguistic variety.

Aboriginal English ranges from light varieties, spoken by most Aboriginal Australians, to heavy varieties. These heavy varieties tend to be inaccessible to an outsider, and are sometimes closer to Kriol, a creole language spoken in northern Australia.

We collected Aboriginal English stories about family, history and the supernatural. From there, we studied the conventions that arise from the way language is used in society. Here are ten features unique to Aboriginal English, based on our observations in Nyungar country in Perth, Western Australia.

Aboriginal English speakers convey respect by referring to people as Auntie or Uncle, including senior people the speaker has never met before.

While Standard Australian English speakers are expected to hold direct eye contact, for some speakers of Aboriginal English this can be perceived as rude or threatening.

In seeking information, Aboriginal English speakers are likely to prefer uninverted questions such as “That’s your Auntie?”, rather than “Is that your Auntie?”

The term unna is frequently used at the end of spoken utterances to establish shared knowledge.

So when someone says “She wicked big, unna” the speaker uses unna to seek confirmation for her statement. Unna is used widely in Western Australia but also appears in varieties of Aboriginal English spoken in the Northern Territory, Queensland and New South Wales.

A common feature of Aboriginal English is the omission of the “h” sound at the beginning of words, such as “appy” from “happy”.

This “h” sound is also sometimes added to the beginning of words, with “instance” becoming “hinstance”.

Aboriginal English speakers also switch “k” and “s” sounds in the word “ask”, pronouncing it as “aks”. This also happens in African American Vernacular English throughout the USA.

Sometimes when the verb “be” is used in speech, it doesn’t change with speakers in the same way it does in Standard Australian English. So someone might say “we was yarning” instead of “we were yarning”.

Double negatives are commonly used. Aboriginal English speakers may say “No one got out of no motor”, where “no one” and “no” are used together to express negative meaning.

Aboriginal English also uses the word “them” in place of words such as “those”. For example, “all them tablets” instead of “all those tablets”.

These are not grammatical errors: they are correct given the rules of Aboriginal English

The word “cruel” is used as an intensifier (“cruel tired”), and the term “shame” is used to mean “embarassed”, as in “I was shame to say that in front of my people”.

Speakers sprinkle their speech with words from original Australian languages. In the Nyungar community, these include boya (money), boodjar (country), maya-maya (camp/home) and moorditj (awesome/the best).

These give Aboriginal English in southwest Western Australia its unique flavour.

The practice of quoting someone using the phrase “be like” has spread rapidly across the English speaking world over the past 50 years, including in Aboriginal English.

In white communities, “be like” can introduce a speaker’s internal thought process. Someone may say “I was like, ‘That hat looks wrong on you’ but I didn’t say it”. In Aboriginal English speakers also use “be like”, but they mostly do it to introduce content that was actually said.

Young speakers of Standard Australian English have almost abandoned “say” in favour of “be like”. But young Aboriginal English speakers use “say” a lot: almost 50% of their quotative verbs are instances of “say”, as in “They was saying, ‘Quick, tell them to get away from the house’”.

Yarning is a conversational and storytelling style where Indigenous people share stories based on real experience and knowledge, from intimate family gatherings to formal public presentations.

The expression has recently gained momentum in Indigenous Health contexts where it is used to help people quit smoking, for therapy and healing more generally. Instead of a formalised question-and-answer interview, health information is gathered through conversation and story-telling.

In our research, we didn’t need interview questions. The Aboriginal researcher engaged the community in sharing experience and knowledge through yarning. It’s yarning that helps Aboriginal English thrive.

This article is republished from The Conversation under a Creative Commons license. Read the original article.